The history of the microplate — a ubiquitous biomedical lab technology

By Thomas SöderqvistNovember 30, 2010No Comments 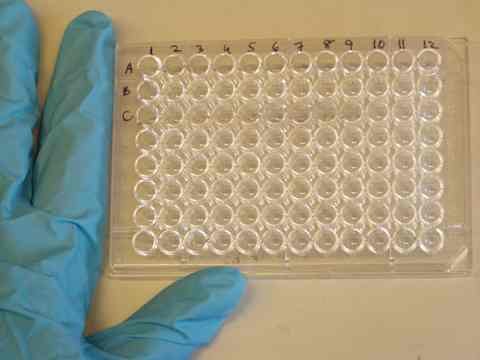 One of my favourite objects for acquisition and display from the world of biomedical and clinical laboratories is the microplate (microtiter plate, microwell plate).

A microplate is simply a series of small test tubes (‘wells’) arranged in a regular matrix pattern on a plastic plate, usually made from transparent polystyrene.

The little plate makes it possible to handle many samples in parallell—the most common size is 96 wells, but there are plates with several thousand wells—and the results can be read in an automated plate reader. In addition, the small size of the wells reduces sample volumes (from milliliter scale to nanoliter scale), which in turn saves money spent on reagents, like enzymes, which can be forbiddingly expensive.

So it’s simple, low-tech, modest, cheap and cost-saving—no doubt the main reasons why the microplate is a ubiquitous tool in laboratories around the world for all kinds of biomedical research and clinical diagnostics. Most of today’s high-throughput analysis in genomics and proteomics is unthinkable without microplates.

In other words—the perfect lab technology.

What about the history of the microplate? Professional historians of medicine and/or technology haven’t paid much attention to the unassuming plastic lab device. After a few minutes on the web, however, I found out that the earliest microplate seems to have been constructed by the Hungarian medical microbiologist Gyula Takácsy (1914-1980). The Hungarian National Center for Epidemiology writes on their website that:

To respond to the shortage in laboratory supplies and a severe influenza outbreak in the early 50s in Hungary, Dr. Takácsy developed several excellent innovative lab supplies and techniques much ahead of his age. Describing his technical innovation, the spiral loop instead of pipette and glass-plates with wells instead of tubes, he used the term micromethods published in Hungarian in 1952 and in 1955 in English. He was the first to have the notion to apply calibrated spiral wire loops for multiple simultaneous serial dilutions in plastic multiwell strips.

“… very small volumes of blood taken from the fingertip or from laboratory animals can be taken up and diluted for quantitative work. The technique has been found particularly useful in virus research, since it is not negligible how much has to be used from costly immune sera and antigens”.

His paper focused on the use of spiral loops for serial dilutions and the testing methods for haemagglutination and complement fixation, however, the “8×12 grooves” that “can take up to 0.15 ml fluid” could describe the modern microplate.

So disease and shortage of supplies was apparently the mother of microplate invention. Also in the 1950s, US inventor John Liner (who founded a company called Linbro, which was later merged into Flow Laboratories Inc, which in turn was swallowed by ICN Flow, which is taken has been over by MTX Lab Systems; mergers and acquisitions in the medical and laboratory device industry is an extremely interesting history in its own right) introduced a vacuum-formed panel with 96 wells. Looking back in the late 1990’s, Liner wrote that “I consider myself  the grandfather to the disposable microplate, about 1953 I used a white styrene vacuum formed panel …”. Yet another case of multiple invention.

I also found some technical details about the early development of microplate automation here, and I found a reference to a web publication (Ray Manns, Microplate history. 2nd ed. 1999; http://www.microplate.org/history/det_hist.htm) in L.J. Kricka and S.R. Master, ‘Quality Control and Protein Microarrays’, Clinical Chemistry vol. 55: 1053–1055 (2009)—but the publication seems to be removed from the site.

So the microplate is almost untrodden territory for historians of medical technology. Maybe a medical student would like to explore its history and importance for the development of genomics and proteomics in a term paper?